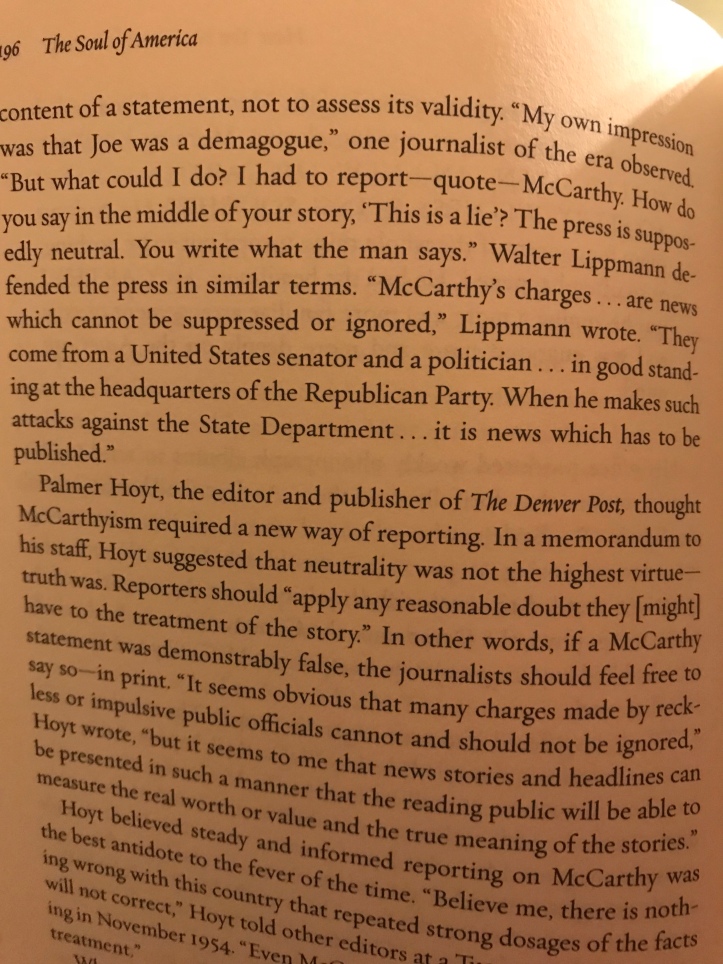 I am hip deep in a wonderful book, Jon Meacham’s “The Soul of America.”

It’s my second Meacham this year – “Franklin and Winston” was solid – and this might be one of the best comprehensive histories of the nation I’ve ever read. I’ll toss up a deeper review later, but I wanted to point out this passage on Joe McCarthy.

The book itself is a response to Trumpism. Meacham digs down into some of the grimy areas of our nation’s history and plucks out what virtue or luck kept us moving toward that more perfect union.

I’ve long thought there were parallels to McCarthy in Trumpism, particularly the vainglorious thug who capitalizes on the fears of the populace. But I think this press reaction is an interesting point.

But I feel compelled to say this: It shouldn’t just be McCarthy and Trump whom the press points out as liars. Now, these two trafficked in it so regularly, it couldn’t be avoided. But the idea that something should be reported without a check in the hard news story is absurd. Journalists have an obligation to their readers and the facts to point out the demonstrable lies. I point this out not to worship at the altar of Both Sidesism, but because one of the defining moments during my lifetime in this country is the Iraq war. The national press still too often cowrtows how much the public was misled in that episode.

We cannot afford that under Trump or his successors. We must learn our lessons.